Do we just take a pain-killer? Why not treat the root cause of the pain? 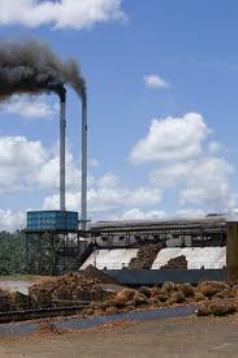 Black smoke emissions into the atmosphere from boiler flue-gas stacks is a common sight in rural Malaysia, where the majority of palm oil mills are located. More so than the visible black smoke emissions are the invisible gaseous and particulate matter spewing out from the flue-gas stack. The main pollutant of concern is the particulate matter present in the stack discharge that gives rise to suspended atmospheric particulate matter at ground level in the surrounding areas of the palm oil mills. This poses serious health concerns among the mill workers and residents who live or work in the neighbourhood around the mills.

The particulate matter varies in size, where in general, the smaller and lighter particles stay longer in the air, and when inhaled can penetrate deeper into the lungs and adhere to the lung tissues. Studies have shown that airborne particles smaller than 2.5 microns in aerodynamic diameter (PM2.5) are particularly deadly as it can penetrate the deepest part of the lungs and trigger health problems.

Thus, the government has enacted the Environment Quality (Clean Air) Regulations, 2014 to enforce the compliance of maximum concentration limit values for selected air pollutants at the flue-gas stack discharge. Emission limits have been established to address a variety of concerns about atmospheric pollution on the human and natural environment. The prescribed maximum emission limit value for total particulate matter concentration is 150 mg/Nm3 and for smoke opacity is shade No. 2 on the Ringlemann Chart for boilers of capacities used at palm oil mills. However, the particle concentration limits in term of the particulate size classification are not specified. Maximum value is also prescribed to limit the concentration of gaseous pollutant of Carbon Monoxide to 1000 mg/Nm3.

Air pollution control system (APCS) may be installed for compliance of these limits. However, most air pollution control equipment that provide end-of-pipe treatment (e.g. cyclone, vortex tube, fabric bag filter, electrostatic precipitator, wet scrubber) are either ineffective to control the particulate emissions of smaller than PM10 or not economical for installation at presently operating palm oil mills. For example, the dust collection efficiency of electrostatic precipitator is sensitive to varying flue gas flow rates and particulate burdens during operation.

It is to be noted that the maximum emission limit values for the selected pollutants are set to a specified reference thermal efficiency of boilers of at least ninety percent (90%). Thus, boilers operating at lower thermal efficiencies are expected to scale down the emissions concentration to cap the pollutant load into the atmosphere. For example, a boiler typically operating at a thermal efficiency of sixty percent (60 %) at palm oil mills is expected to control pollutant emission at a proportionally reduced concentration of 100 mg/Nm3 for the particulate matter and 660 mg/Nm3 for Carbon Monoxide. Further, the regulations stipulate prohibition of emission dilution before it is emitted to the atmosphere. In this regard, any increase in the air-to-fuel ratio or excess air for combustion in boiler furnace will be considered as an attempt to make the emissions less concentrated.

The regulations implicate that the thermal efficiency of the boiler which is influenced by factors such as the method by which fuel is fed and fired in the furnace and the way the boiler plant is operated are major considerations prior to employing an end-of-pipe solution. Good combustion in the furnace and high thermal efficiency of the boiler can be effective to reduce the gaseous and particulate emissions for a given steam generation capacity.

Thus, to a large extent the regulations encourage adoption of “Best Available Techniques Economically Achievable”, with emphasis placed on pollution prevention techniques rather than end-of-pipe solutions.

It is generally known that the unique feature of palm oil mill boiler operation is the fluctuating steam demand and the steam demand peaks which frequently exceed boiler capacity. These onerous characteristics in operation induce erratic upsets in furnace combustion that cause poor combustion and carry-over of fine ash from the furnace into the flue-gas draft and from there, to the stack. Poor combustion also leads to carbon monoxide emission. The highest carbon monoxide emission, dust carry-over and black smoke emissions coincide with peak steam demand. Furthermore, these features also drastically impede the thermal efficiency of the boilers in operation.

Using energy efficiently is an effective way to reduce emissions. When less fuel is burned to produce a given amount of steam, emissions are reduced. Achieving high efficiency is therefore an important consideration in operating a low-emission steam boiler. In addition, the overall system efficiency can be improved with attention to the application and uses of the steam produced by the boiler. Improving system efficiency means that less fuel is used to run the entire palm oil extraction process, which in turn leads to lower overall emissions.

Thus, controlling the boiler load swings that leads to furnace combustion upsets should be the foremost step to bring about improved fuel feeding and boiler draft control to reduce gaseous and particulate matter emissions carry-over. It is also important that the operation of existing boilers is maintained within design load capacity. These are pre-requisites for and the key to clean combustion, reduced stack emissions and improved thermal efficiency. In other words, the boilers will be rendered steady-state, hitherto not achievable.

Boiler controls then become amenable to full automation once boilers are rendered steady-state operation. Automation can then facilitate control of the boiler plant including furnace draft and fuel feeding.

Steady-state and high thermal efficiency operating conditions of the boilers enable other options to be explored, for example, installing simpler and lower cost air pollution control systems as an end-of-pipe solution which will be effective for regulatory compliance.

The operation, monitoring and maintenance costs to ensure sustained proper operation of the air pollution control systems are high and usually the highest cost of operating the biomass fired steam boilers. High thermal efficiency as prescribed in the regulations, can actually work to the favour of palm oil mills by providing savings in energy or biofuel costs at many times more than the costs to maintain the APCS.

It is obvious that the erratic steam demand pattern of the palm oil mill extraction process is the lead cause of excessive pollution emissions and energy wastage. The major solution, therefore, lies in a holistic and systemic control of the steam demand pattern at the mill extraction process that adversely affects the boiler operation. Simpler air pollution control equipment for end-of-pipe treatment may subsequently be sufficient to cope with compliance to the regulations economically. Approaches to the design of more systemic and sustainable solutions for a whole-system design is a transition to a systemic paradigm. Technologies to shield fluctuating steam demands of the mill extraction process reaching the boiler and power plant are already available. These represent the economically achievable Best Available Technique.

Do you have any experience with emission control system design or to improve plant operations at palm oil mills? What are your thoughts on this most recent regulatory emissions compliance requirements? Let us know in the Comments section, below.